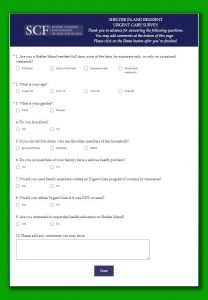 Urgent Care facilities primarily treat injuries or illnesses requiring immediate attention, but not serious enough to require an emergency room visit. In some towns and cities Urgent Care centers are open 7 days a week, 24 hours a day. Still others are open for extended hours 7 days a week.

In response to an expressed concern that health care on Shelter Island – short of emergency medical services – is limited on weekends and at night, the Senior Citizens Foundation conducted a survey of Shelter Island residents between July and October 2017 to determine the extent of their interest in an Urgent Care capability.

The 10-question survey form was mailed to approximately 2,200 Shelter Island property owners and posted on a website operated  by SurveyMonkey®. To date, 439 Islanders responded by return mail or via the survey response website. Strikingly, 95% of the respondents indicated they would use an urgent care facility if covered by insurance; 58% would use it if it were NOT covered. 64% expressed interest in expanded health education on the Island.

In view of the robust number of survey respondents and the fact that most of them would utilize an Urgent Care program, the Board of Directors of the Senior Citizens Foundation approved the establishment an Urgent Care Exploratory Committee to determine its feasibility.